3 Times When it’s Best to Do Nothing 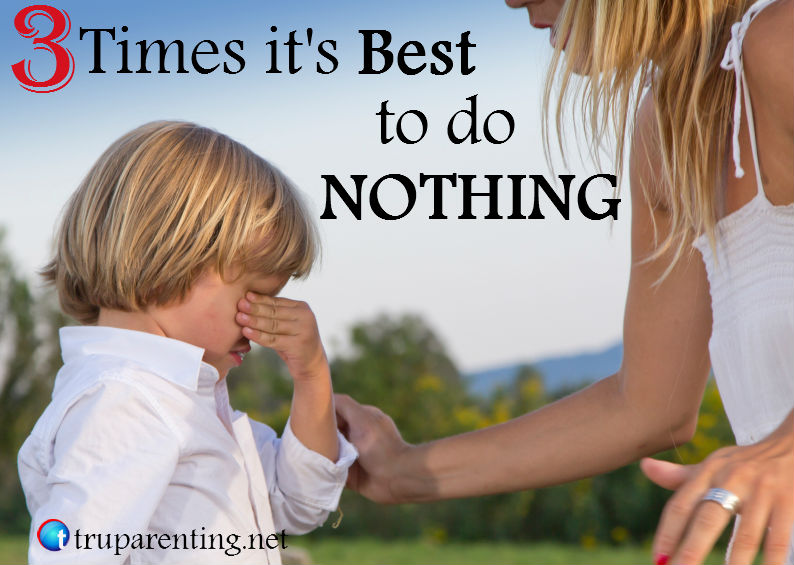 There are times as a parent when it is best to do nothing. The crazy thing is that the form of “nothing” I am talking about is one of the hardest things for parents to do. This “nothing” definitely feels like “something.” In this respect, doing nothing means putting off the lecture, releasing the death grip and letting go of control.

1. When you are about to explode

“Don’t you ever touch my van again!” I remember this sentence as if it were seared into my conscience with a hot branding iron. My little brother, for reasons I have never understood, took a 16 penny nail and scraped a distinct line along the side of my parent’s new van. I remember watching this and thinking, “Oh man, Mom’s gonna kill you.” Well, Mom didn’t kill him, but I’m pretty sure she wanted to when she found out. He was just about to drag the point of the nail down the other side of the van when my mother peaked curiously through the front window of the house. She burst out the front door and seized the nail from his little fingers. I remember my mom squatting down next to my brother and saying in a frazzled voice, “Don’t you ever touch my van again!” She said nothing else. She stood with the nail grasped tightly in her fist, turned around like a military man doing an about face and briskly walked in the house.

Since becoming a parent myself and working with countless other parents, I admire my mother’s self control in that moment. I have witnessed far more harsh scolding and punishments come from parents for far less destructive acts.

It’s difficult when your son has done that thing you told him not to do, again. You see him from across the room and give the order, “put down the marker, now!” To which he gives a defiant grin and proceeds to scribble on the wall. It feels for many parents like a volcano of words coupled with a tornado of action are just below the surface and the barrier won’t hold for long.

When you are gripped by anger and you can feel the yell rising in your throat, its best to do and say nothing. You may need to remove a nail or a marker from the child, but the more you do and say out of fury and anger, the less effective your discipline and relationship will be. Remember that people and relationships are more valuable than things. That doesn’t mean that consequences won’t follow. It simply means that refraining from saying or doing anything in a moment of explosive anger allows us to provide opportunities for the child to learn and make restitution without destroying the relationship in the process.

2. When you are in rescue mode

Grandpa needed his lawn mower back, but it wouldn’t start, and my two oldest sons had that guilty look on their faces. My father in law had allowed us to borrow his riding lawn mower for most of the summer due to our lack of a working mower. It had been sitting in our garage between mowing and the kids had been informed that they were not to play on or near the mower. However, when Grandpa came to get the mower, he noticed the gas cap was barely on and there were fresh blades of grass decorating the opening. He said, “Did you guys put grass in the gas tank?” They apparently thought it was a grass tank rather than a gas tank. They confessed with downcast eyes. Grandpa announced, “OK, you guys need to come down and help me clean it out and get it running again. You may have to use some of your lego money to get some new parts if we need them.” The kids looked up at my wife and me with looks that screamed, “You can’t let Grandpa bankrupt our lego accounts.”

A big part of me thought, “Well maybe I’m responsible, I shouldn’t have let them put grass in the tank.” Another part thought, “They’re just kids. They didn’t know what they were doing. They don’t have enough money. I should just take care of it.” Luckily, I didn’t and neither did their mother. This would have robbed them of learning great lessons that day that no punishment we could have given would have taught.

Not only did they learn that it may be wise to refrain from playing with things Mom and Dad ask them not to play with. They also learned that mowers don’t run on grass and had a lesson on how to take a lawnmower apart and put it back together. They learned to take responsibility for their own actions.

I’ve found in my counseling experience that it is often hard for parents to refrain from rescuing their kids from the natural consequences of their actions. When kids procrastinate a project and they announce, “I forgot I have a project due tomorrow,” parents will bail them out. Other parents will find ways to blame the teacher when their child gets a poor grade.

There are moments when our children need a rescue but when it comes to school, solving daily problems, overcoming conflicts with other kids, and so many other things, there is no need to solve the problems for them.

Sometimes we rescue simply to save face. It’s more about “not looking like a bad parent” than it is about helping our children learn and grow. We also may worry about the consequences being more than our kids can handle. Don’t allow these fears to destroy these natural learning opportunities.

3. When your kids confide in you

The garbage can was full of wet pull-ups, but their seven year old boy had been reporting no nighttime accidents for over a week. When it came time to take the garbage’s out however my friend’s son knew he couldn’t conceal his secret any longer. As he and his mom walked to his room, he was a couple steps ahead of her. Just before they got to the garbage can he broke down and confessed. He had been wetting the bed almost every night but felt ashamed about it and so he lied and hid the evidence.

I’ve worked with parents that would have gone crazy and ranted over lying about such a silly thing, or maybe would have punished him for wetting the bed and lying about it. However, that’s not what this mom did. She did nothing; nothing but listen and hug him as he cried in embarrassment. She let her son do everything. When he had composed himself, they tied up the garbage bag and took it out together. There were no comments, no lectures, no plans. There was only a feeling that he could trust his mom with his emotions and with the things he was embarrassed about. He realized he didn’t need to lie.

As kids grow up they run into new challenges and struggles, some bigger than others. I know a young man that at a young age was exposed to pornography and by the age of thirteen or fourteen felt terrible about viewing the explicit material. He told his parents in hopes that they would help him quit. The parents “freaked out.” They were upset and punished him for his behavior, which drove a significant wedge between them. They pushed and he pushed back. The result was a lot of pain and heart ache for both the parents and the son. On the other hand, I know a family that faced the exact same problem, but when their son confided in them, they extended open arms and thanked him for trusting them to help him. He got the help he needed and the experience brought him and his parents together.

I guess doing nothing is not nothing after all.

Sometimes it is best to wait to respond. Sometimes it is best to either remove yourself or quietly move towards your child without forcing it. Sometimes it can be better to simply hold your ground and let the child move. When you start to feel the anger boil within you, when you feel that urge to rescue or when you hear something come out of your child’s mouth that is given in strict confidence, remember that the best thing you can do, just might be to do nothing.

Question: What is one of your best “do nothing” moments?