The 4 Part Formula for Conquering Any Goal or Obstacle 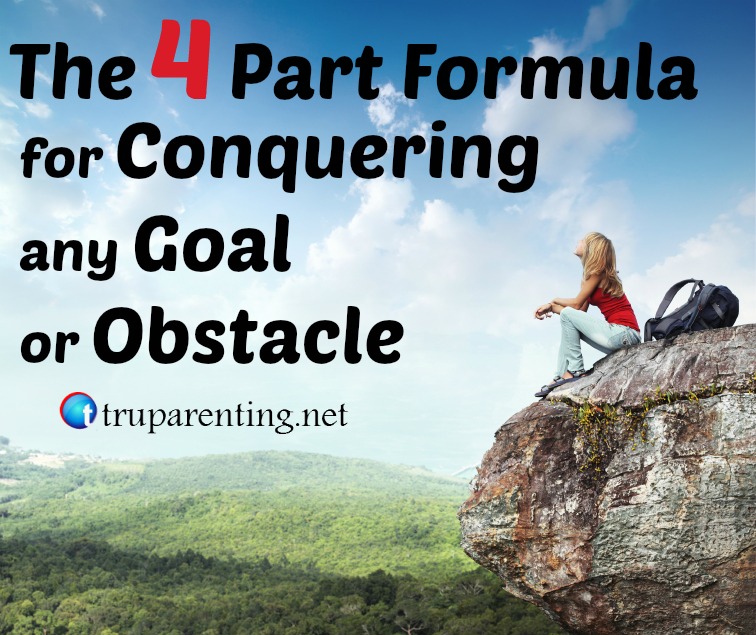 We all have dreams. We all have bad habits. We wonder how to change the current cycles of our lives and start making things happen.

What are your desires? What is that amazing thing that keeps you up at night; The thing that you think about when you’re not thinking? What is the miracle you would love to see in your life? Possibly you simply want your child to learn to read. Maybe you want to build a beautiful and happy relationship with your son or daughter. It could be anything. Maybe you dream of putting your child through college. Maybe you have an invention in your basement that you’d like to sell to the world. Maybe you want to write or act or sing. Maybe you want to learn to speak another language and then take your family on a trip and order dinner for your family in that language. Don’t stop at wishful thinking, your desires are all within reach! You can do it! You can have it! The secret to making things happen is not really a secret at all, it’s just tougher than most of us would like it to be.

I’ve found that the patterns of achieving any kind of success are universal. The same patterns apply to business, relationships, personal , mental, emotional or physical improvements, or whatever you want to apply yourself to. The following four patterns are concepts that I see exemplified over and over in people who do overcome great obstacles and fulfill their dreams. When applied, these 4 principles work synergistically as a powerful formula for finding and fulfilling our dreams.

4 Part Formula for Reaching Any Goal

The first step is to make a decision. You have to choose to do it. Ella Wheeler Wilcox said, “There is no chance, no destiny, no fate, that can circumvent or hinder or control the firm resolve of a determined soul.” I have never heard of a parent who broke a habit of yelling without first making the conscious, absolute decision to do so. I’ve never heard of an entrepreneur that has built a multimillion dollar business without setting their intention first. I have never seen anyone do almost anything challenging, without first saying, “I will!”

[Tweet “I have never seen anyone do almost anything challenging, without first saying, “I will!””]

C.S. Lewis once said, “I pray, not to change God, but to change me.” When I suggest prayer as a major part of the pattern of success, I’m not suggesting a passive daily recitation of what we want or “wish” would happen. I talking about an active and even interactive experience that allows us to take our goals, and aspirations before the omnipotent and to counsel with God and allow him to inspire, direct and strengthen us to overcome and achieve far more than we thought was possible.

When our goals truly challenge us, when they are more than is comfortable, they require faith; faith in God and faith in ourselves. I knew a wise man that called this combination of faith in God an self, “humble confidence.” I have rarely met anyone who has reached extraordinary achievements that has not completely believed, almost known, that he would achieve it long before it was a reality. This doesn’t mean that they never had doubts or insecurities, just that when doubts and insecurities arose, their faith in the value of perseverance outweighed the doubt.

When it comes right down to it, nothing will ever happen if it stops with a thought. There may be those that mock or challenge your ability to reach your goal, but there is satisfaction in doing the work. I’ve always loved the following quote by President Theodore Roosevelt.

“It is not the critic who counts; not the man who points out how the strong man stumbles, or where the doer of deeds could have done them better. The credit belongs to the man who is actually in the arena, whose face is marred by dust and sweat and blood, who strives valiantly; who errs and comes short again and again; because there is not effort without error and shortcomings; but who does actually strive to do the deed; who knows the great enthusiasm, the great devotion, who spends himself in a worthy cause, who at the best knows in the end the triumph of high achievement and who at the worst, if he fails, at least he fails while daring greatly. So that his place shall never be with those cold and timid souls who know neither victory nor defeat.” (Theodore Roosevelt)

There is nothing that can keep you from achieving anything if you put the work in. The leadership expert, Michael Hyatt suggests in his article, “What to Do When you Don’t Know What to do” that we simply do the next right thing instead of being overwhelmed and paralyzed the big picture. Just get to work!

Here’s the truly hard part, where the faith and determination is truly tested. This is where those that really want it and those that “wish” for something better are separated.

There is simply no way around it. I heard someone say once that when we are struggling to push through barriers and outlive the struggles of fulfilling our dreams we always have our rough spots and we ask, “What am I doing wrong?” The answer is often that it’s not that you are doing the wrong thing, but rather that you have not been doing the right things for long enough. Exponential growth looks rather unimpressive at the beginning stages of the growth curve but if we are patient, we will see remarkable increase in time. That doesn’t mean there won’t be mistakes and course corrections along the way, but when we endure we don’t see those mistakes as failures but springboards to learning and development.

What habit have you been struggling with for months or even years that you haven’t known how to kick? Isn’t it about time to give it another shot?

What goal or dream have you been putting off because it seems so unattainable? I know that with a firm resolve, a little prayer and faith, unrelenting effort and giving it time, it is within your capacity to achieve!

Question: What is your dream? Share your dream and as Michael Hyatt says, “What is the next right action to do to achieve it?”

If you liked this article, and know someone who would benefit from it, please LIKE and SHARE it on Facebook, other social media or just send them an email. You may also like the following articles. “Parenting Ups and Downs & Exponential Growth” or any of the articles pictured below.