Family Cycles: The Key to Positive Growth and Change 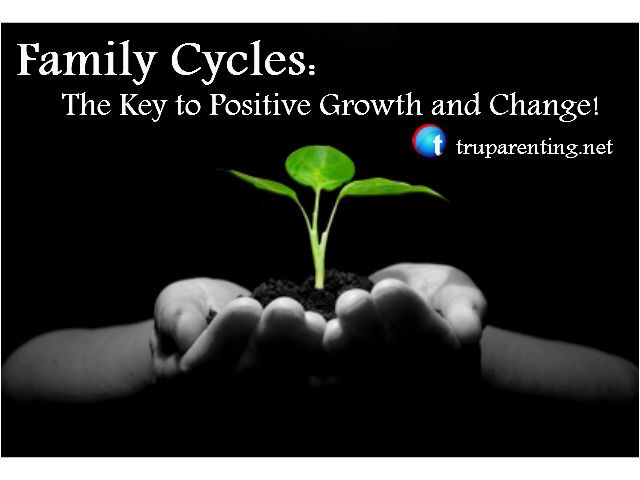 Yelling is a hot topic these days! Countless programs and articles hammer away at parents to “keep your cool!” I’ve talked to parents for years that have said, “I’ve been told I need to keep calm and stop yelling but how do I do it? I try and try and feel like I’m getting nowhere and my kids don’t help at all. I feel like I have to yell to get them to do anything.” With the New Year just started I’ve heard many parents declare that it was their New Year’s resolution to stop yelling. There are whole books (Scream Free Parenting) and websites (Orange Rhino) devoted to this one topic.

But why is it so hard to change this one little behavior? Why do so many struggle with simply lowering the volume of their voice?

For the same reason its hard for your son or daughter to clean up their toys, stop hitting or calm down. It’s because it’s not just one little behavior. It’s part of a much bigger cycle of thoughts, feelings, behaviors and interactions. It’s just one part of a cycle that is running on autopilot. Once we understand these cycles, we can start to change them and the automated nature of cycles actually creates positive momentum to reach our personal and relational goals.

A mom relayed the following story in a counseling session months ago.

Irritation filled her as she listened to her son dump his heap of toy cars in the middle of the living room floor. She had “told him a million times” that his room was the place for his cars. Moments later he entered the kitchen where she was cooking dinner and said, “I’m starving. When’s dinner gonna be done.” She turn and defensively snapped, “What does it look like I’m doing?” He replied, “Hurry, I’m going to die of hunger.” She told him, “Well, your not eating anything until you clean up those cars all over the floor. I told you to keep those cars in your room anyway.” Now he was the defensive one. He said, “There’s no room to play cars in my room!” By this time his voice and hers were elevated uncomfortably. Before she knew what was happening, she heard herself yell, “Just get out of here and go clean up or you’re going to your room without dinner!”

That sent him over the edge, he started to cry, plead and repeat, “But… I’m starving mom. You’re so mean!” At that point dinner was boiling and so was she. She snapped back again, “OK, that’s it! Go to your room! Sorry mister, you just lost your dinner!” He stormed off crying and yelling. She continued to stew over the argument and her son’s disrespect and defiance. By bed time she had calmed a little but as she walked to his bedroom she realized he had never cleaned the cars up and all of the original feelings of anger rose inside her again. She thought, “He doesn’t deserve any privileges tomorrow. He never did what I asked.” She furiously picked up the cars and threw them in the toy bucket, grumbling like Oscar the Grouch the whole time.

The next morning she greeted her son with the news that he would not be allowed to play or go to his friend’s house after school “until he could learn to do what she asked without an attitude.” He snarled, “Whatever. You never let me do anything anyways.” The temperature rose again and in no time she heard herself yelling again.

You can see that yelling is reactive and begets reactivity, which then feeds a whole new revolution of reactivity. With each revolution of the cycle, it seems like it gets worse and worse and it gets harder and harder to stop the yelling in its tracks.

People often feel like they can’t seem to get out of the same cycle that plays itself over and over again. They may even remember their parents doing the same thing to them and it scares them to death to see tempers flair in their child. They want to stop the yelling but ask, “How do we break the cycle?”

This question, “How do we break the cycle?” is a question that I have heard more in my counseling experience with parents than almost any other question. The concept of cycles is the central concept of the principles I teach my clients. A better understanding of how cycles work in our lives has had greater impact than almost any other tip or disciplinary trick I could share with clients.

It’s important to understand the following principles in regards to cycles in order to apply TRU principles effectively and change negative cycles to positive cycles.

1. Cycle are always happening whether you know it or not. From the very beginning the mother in our story didn’t recognize that her irritation was already priming her to yell and create a guarded atmosphere when her son barged in the kitchen and complained about his hunger. This led to yelling and her son’s defensiveness and failure to complete his chore. Then hard feelings grew and unreasonable actions followed that reinforced the negative cycle that started anew the following day.

2. Every cycle has an object. The object is the central point of change. Identifying an object helps to give a point of reference from which to change the cycle. In the example the object could be either decreasing yelling (Mom’s behavior) or improving the cleanup procedure (the son’s behavior). Regardless what you identify, the principles to improve the cycle are the same and improvement in one area will lead to improvement in the other, if we truly are focusing on the cycle.

3. Identify and intervene in each stage of the cycle…

When we think about changing some negative cycle in our lives we seek for specific, direct intervention that will forcefully and drastically change its course. The best way to change a negative behavior (yours or your child’s) is to understand and treat its context (all parts of the cycle).

When you plant a garden, it’s exciting to see the first sprouts a plant poke up through the ground but if we were to go out and tug on the leaves, it wouldn’t speed up the growth, it would simply uproot the plant. Instead we tend to the before, during and after stages of the cycle. We prepare ground and plant the seed (before), we nurture the seed and weed (during) and then we harvest and use the byproducts for mulch to feed the process next time around.

Effecting things like yelling, or arguing, or even our kids learning chores or respect requires that we prepare them (Before) by building strong relationships, spending time together, smiling, working together, creating plans, managing triggers and environments and then teaching skills and values during the good times. It takes empathy (during) conflict and following plans that help parents to problem solve with their child rather than correct and challenge. It means (after) allowing natural consequences to take their course, forgiving and learning from the process.

Replacing the yelling cycle with a positive communication cycle.

The mother in our story could see the importance of the cycles that were constantly repeating themselves and so we created a new plan for intervening in the before, during and after stages to create a healthier, happier cycle.

Within the first week of creating a plan for addressing the cycle, the yelling had greatly decreased and relationships were healing and growing.

When we take a “cycle perspective” we focus on teaching and improvement rather than punishment and correction. Within the context of a whole cycle we are always acting preventatively and proactively, instead of reactively because cycles will always repeat themselves. Our job is to improve the cycle with each revolution!

Question: What has helped you change negative cycles in your life?