How to Handle Sibling Teasing and Fighting 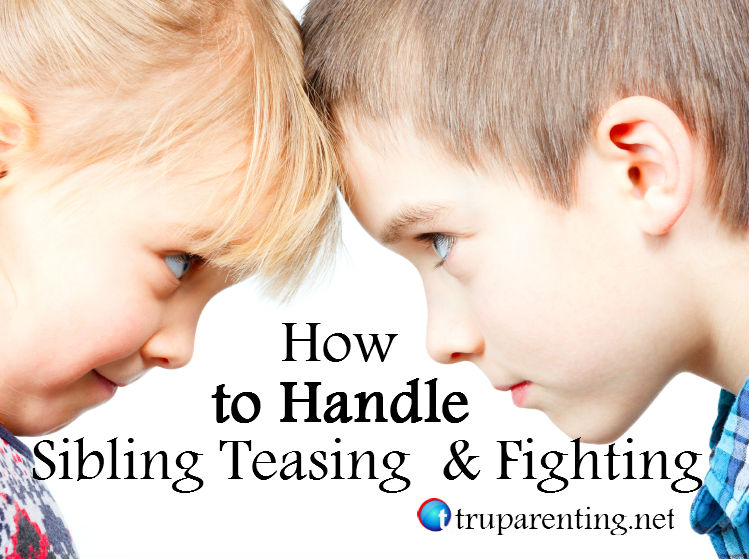 “He’s touching me!” We’ve all experienced this somewhat comical yet excruciatingly irritating phrase. We have become very well accustomed to this phrase with my three little boys. Even my daughter, who cannot say words yet, already seems to be able to express the sentiment of this expression with nothing but high pitched squeals and grunts.

Sibling teasing and fighting comes in all shapes and sizes. It may look like snatching toys from each other, name calling, taunting, unwanted touching all the way to hitting, kicking and other aggressive acts.

Rivals from day one… But, for what?

When I was in my school years, my little brother was two years younger than me. We played together all the time. Until I was about nine or ten years old, we would play games together and I always won. I was pretty comfortable with the balance of power as it was established. However, when I was about nine years old my brother begged my parents to put a tether ball pole in our front yard. He spent hours hitting that silly ball until it wrapped around the pole. One day, he invited me out for a friendly game of tether ball and the game was a cinch. It was over in about twenty seconds. The only problem was, he won! I can remember him gloating and sticking out his chest like he had won an Olympic event. I was not going to have that stain on my record, so I challenged him to a rematch. It happened again. To this day, I’m not sure if I ever beat my little brother at tether ball.

I can remember increasing the level of my teasing following a lost tether ball tournament. I would poke and prod until I could get my little brother to explode. When he exploded, I won. The universe was back in balance. I didn’t always do this consciously, but the fighting and teasing was almost always a power play.

Some refer to teasing and fighting as “sibling rivalry,” and for good reason. Siblings are rivals from day one. They compete for parents’ attention and affection, as well as for power and influence with each other and the world around them. Have you ever seen a child pick up a toy that their sibling has not played with in years and the other child yells, “that’s mine, I was going to use that!” They then proceed to fight over the toy. When one finally relents or a better alternative presents itself, they say something like, “You can have it. I don’t care anyway.” This is not pleasant but it is normal.

These types of power struggles seem ridiculous and petty to most of us as grown parents, but if we recognize the underlying feelings and motives, the struggle is part of growing up and is quite profound. The toy that they fight over may very well be petty, but the battle for significance and self efficacy is part of the cycle of growing up and personal identity. As parents we often still struggle with what we can and cannot control. However, we have learned ways to cope and interact with life’s opposing forces… sometimes.

So, it’s normal… Now what? How to Handle Sibling Teasing and Fighting.

Before sibling teasing or fighting arises:

1. Make an effort to pay undivided attention to each child at some point and take special moments to assure them of their value to you and the family.

2. Teach and model/role-play ways to compromise and solve problems, during the good times.

3. Create with them a reasonable plan for how to use the skills they’ve learned and what you and they will do when teasing and fighting begin.

1. Encourage them to work it out on their own, unless there is threat of injury or death.

2. Separate kids when they choose not to interact respectfully with each other until they find a solution.

1. Don’t let their problems ruin your relationship with any of them.

2. After they have solved the problem, thank them for their willingness to solve the problem and help suggest and initiate ways for them to reconnect.

An interesting thing about the word rivalry is that it has a duel meaning. It means competition, but it also means emulation. It was interesting to think of rivalry in this way because one of kids’ favorite teasing games is what my son calls “copy machine.” This is where they copy everything the other says. They imitate or emulate. To emulate is to strive to equal or surpass. Our kids tease and fight often because they want to be equal. Provide them opportunities to establish and recognize their own value and encourage them to find ways to lift each other up. Turn the struggle of rivalry into an opportunity for emulation and improvement.

Question: What silly things do your kids do to tease each other?