How to Decrease Sibling Fighting and Increase Love 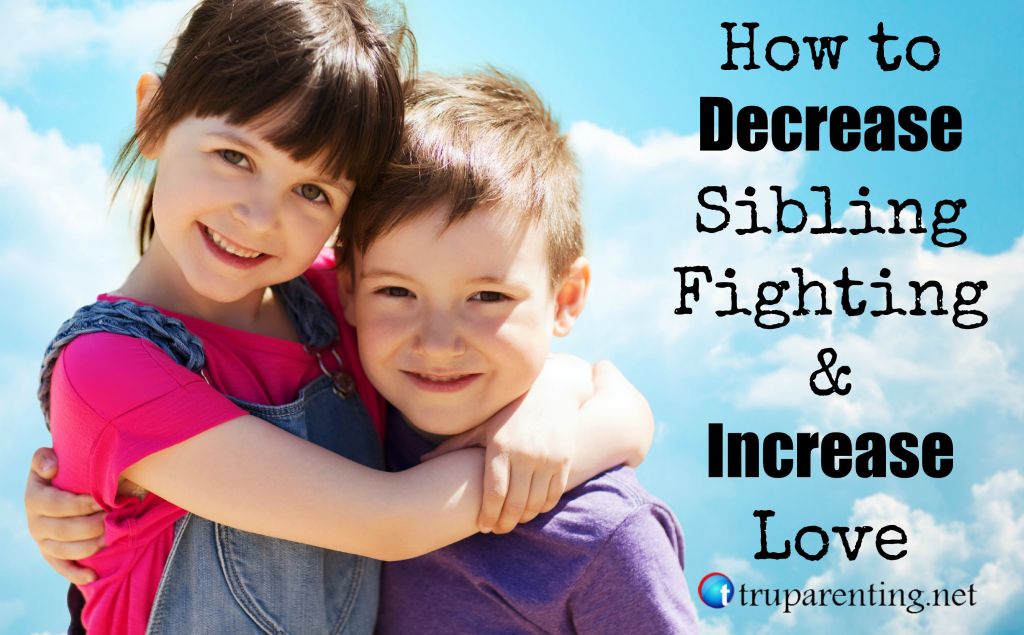 “Ahhhhhh!” Berkeley screamed as he chased his older brother, Culyar, around the house. My oldest son ran just a few steps ahead of his little brother with a half smerky grin and a half terrorized grimace on his face. It was obvious that Cuylar (9) carried a little pride that he had pushed buttons until Berkeley (5) absolutely lost it. But that didn’t change the fact that he knew that once Berkeley had flipped his lid, he could be dangerous, no matter how small he is in comparison. They ran upstairs and down, in and out of the house before anyone could intervene. As they ran past me, I announced, “Stop!” Cuylar stopped reluctantly but abruptly and Berkeley collided into Cuylar and was knocked on his back side. The collision was painful for both parties, but if they were competing for highest decibel count, Berkeley definitely won. Both were crying, but that didn’t stop Berkeley from continuing to try to advance toward his brother in attempt to clobber him.

This story is an example of the kind of sibling conflict behavior that is more common than I would like it to be in our home. I know I’m not the only one that has experienced something like this. I’ve had multiple parents that I work with share similar experiences.

Am I a bad parent? The answer is no, but…

It’s rarely a vicious premeditated attack and there are rarely strong underlying intentions to truly harm each other, but it still happens. A toy gets taken away or someone feels left out, and one or both of the kids falls apart. I know you all know what I’m talking about. I’m sure you’ve all been in the position before of feeling protective of the most vulnerable child involved in a sibling conflict, while at the same time not wanting to take sides or let the mama/papa bear instinct take over in a way that would undermine your teaching them to be more kind and loving with each other.

“Where do they learn it?” This is a question I’ve asked myself when my children have hurt or fought with each other. Sometimes its just mean words, bickering and arguing. However, sometimes it goes further than that. At times they hurt each other. They hit, kick, push, shove and wrestle. I don’t do those things, so where do they learn it? When my kids act this way, does that mean I’ve done something wrong? Am I a bad parent? The resounding answer is “No!” To some extent kids come this way and for a good reason. As they grow up and become more physically and mentally capable they naturally try to defend themselves, but they haven’t yet developed the biological capacity or skills ability to regulate that instinctual reaction. The good news is that it’s not necessarily BECAUSE of something you did or didn’t do, but there is something you can do about it!

How can we help our children get control of themselves and increase their love for each other? The following are 3 steps that have helped to dramatically decrease the fighting between our kids and increase the thoughtfulness and love between them.

3 Steps to stop sibling fighting and increase their love for each other in the process.

1. Stay calm: When the kids are hot and crazy with anger it can be easy to just react and lose our cool. Any time we intervene with limits with our kids, the first step should be to calm and manage our own reactions. Check out some of the tips for keeping your cool in the Quick Calm Toolkit and start a regular meditative practice to gain greater awareness and control over your responses.

2. Separate for safety and redirect their energy: Give them time to process the situation and their emotions and to find solutions to the problem. Establish a method for separating the kids, not as punishment, but as an opportunity to calm themselves and utilize their energy for something more positive and productive (We let the kids choose between two chores that need to be done prior to the next meal). This is often best accomplished before a problem arises. Use a family night to establish a method or task that separates the kids and talk about what will happen when “fighting” happens.

3. Give them a choice to serve each other: The other two steps have been helpful and somewhat effective in decreasing the amount of quarreling and fighting between our kids, but this 3rd step has made the most profound difference. After thought and prayer my wife decided that if the kids had a chance to voluntarily serve one another more the love and harmony in our home would increase. When fighting happened, she gave them the option to opt out of the chore consequence by doing a service of their choice for the family member they quarreled with. The important thing here was not to force them to say I’m sorry or coerce them to choose the service, but to make it an option. Instead of vacuuming their room or cleaning a sink, they could choose to make their sibling’s bed or some other act of kindness or service for the other person. Our children did not choose this every time but when they did it made a huge impact. Having the option also allowed them to stop and think about how their behavior influences their brother or sister.

When we started to offer our children the option of doing a service for their sibling something happened that we didn’t anticipate. After Cuylar and Berkeley’s little tiff, my wife followed the steps above. She let them know that they could choose a chore off the list or they could do a service for the other. As soon as they had completed their task, they could resume playing or join the family for the following meal. My oldest son chose to do a service by folding and putting away his brother’s laundry while Berkeley sat, still upset, on the floor. When Cuylar was done, he came down and announced what he had done with a big smile on his face. He was proud of the kind act he had performed for his brother. Berkeley was a little taken back. He couldn’t believe that his brother would do something nice for him, even though moments earlier they were warring. As a result, he chose to perform a service for Cuylar and multiple other kind acts that, in turn, made him and Cuylar happier and more appreciative toward one another. They had forgotten about the conflict and replaced their animosity with admiration. The effects of that single act alone spilled over into the rest of that day and week. The most wonderful part is that it has decreased teasing and fighting, while increasing their random, voluntary kindnesses for each other. It has helped to create an ongoing reciprocation of forgiveness, mercy and benevolence.

It is true that we serve those we love, but even more so that, we love those we serve. Parents are shining examples of this principle. We love our children, not because of what they do for us, but because of what we do for them. Why should we have a monopoly on the powerful connection and bonds that are forged by service? Give it a try. Make service a part of your plan for dealing with conflict and solving sibling problems. You will see a shift in hearts, minds and actions in your children and you just might feel it yourself.