The Key to Helping Your Overwhelmed Child 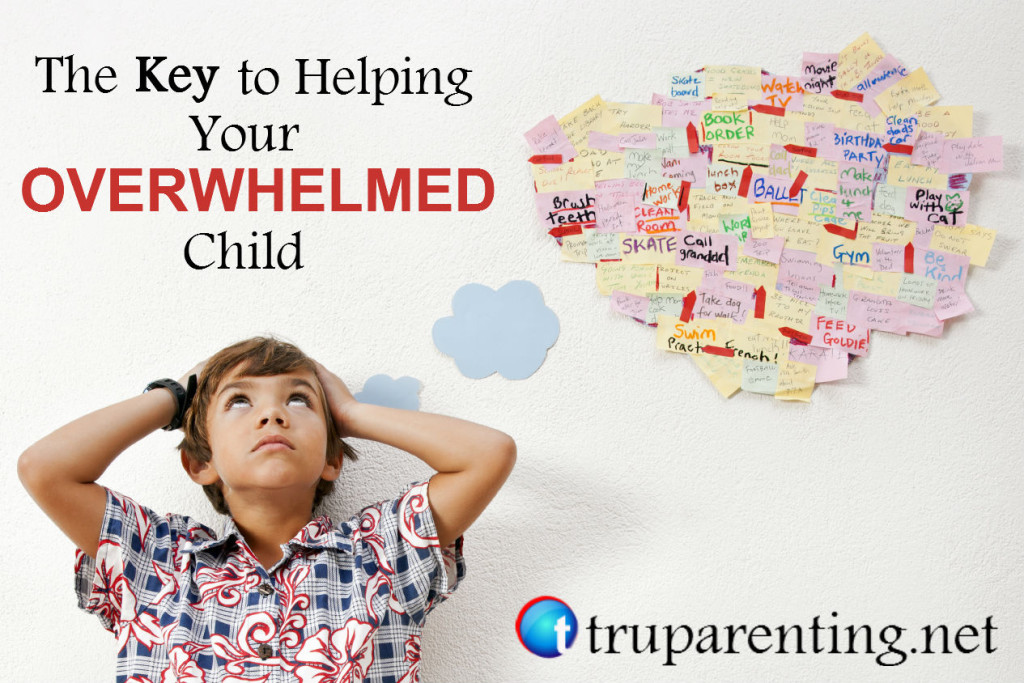 The plan was fool proof. Our sons had creatively come up with their very own plan for completing chores more smoothly around the Smithson home. My three sons, Cuylar, Eli and Berkeley, came up with a whole system of how to make sure that chores got done every day without all the complaining and arguing. When our chore time became a cyclic struggle, we asked the boys what they didn’t like about the way we did chores and how we could make it better. They surprised us with some incredible observations of problems that made chore time difficult for them and came up with personalized, positive solutions.

Problem: They didn’t want Mom to tell them what to do.

Solution: They wanted to choose their chores from a list of chores. They decided that each day they would rotate who got to choose first and would alternate their selections (just like when we chose teams for kickball at recess in grade school).

Problem: They didn’t like to be teased, hurt or kept from completing their chores by their brothers.

Solutions: If you teased, hurt or kept siblings from completing their chores, they had to choose and complete one of that brother’s chores and if they didn’t choose, it would be chosen for them.

Problem: They didn’t want to have to do all their chores at once.

Solution: They split their upstairs and downstairs chores into morning and evening routines.

Problem: They didn’t like that the chores piled up and were so overwhelming.

Solution: They decided that they would “tidy up” toys and clothing before bed to make the mess more manageable and would not go more than one day without completing all their chores.

That evening we wanted them to feel serious ownership for this great plan they created, so we made 3X5 cards with the daily chores drawn or written on them. The next morning they were eager to chose their chore cards and begin the plan they had created. It worked beautifully. They completed their chores in record time with no complaints.

[Tweet “It worked beautifully. They completed their chores in record time with no complaints.”]

Only a few days later the whining started again. Cuylar started to feel overwhelmed by his stack of five or six chore cards. He would lay them out and then sit and stare at the cards like he had been asked to build a rocket from household appliances. What happened next was amazing, Cuylar solved the problem to his frustration and taught me something important about overcoming overwhelm.

Cuylar’s Epiphany: One step at a time

Cuylar turned his cards face down on the ground so he couldn’t see the picture and chore listed. Then he flipped over one card and did the chore on the card facing up. After completing the designated chore he simply turned his next chore card over and completed that task. He knew that looking at all of those chores together was too much. Taking it all on at once was almost paralyzing in his mind and so he just took it one small task at a time. We had broken it down on cards but even that, was still overwhelming when everything was laid in front of him. The only way he could get his seven year old mind to process his tasks effectively was to put all the other tasks out of sight and out of mind. He could then digest that one thing and then move on to the next. Cuylar’s frustration with chores stopped and he and his younger brothers play this “chore game” each day.

Cuylar’s insight encouraged my wife and I to see things differently and to look for opportunities to decrease the strong feelings and emotional reactions of overwhelm by applying this one principle of stress management. We were able to see that the world looks very big to our small children and what seems manageable, even easy to us, may seem overwhelming and almost impossible to them. This principle applies to adults as well, but on a different scale. We may set large goals for ourselves or look at our never-ending, overwhelming to do list and feel helpless and hopeless. But when we break tasks down and isolate the finite parts, soon we find that we have completed the whole job.

Some kids need tasks to be broken down into smaller pieces than others based on their age and development. Experiment with the size of certain tasks and the number of tasks they are capable of. Give them tasks that are slightly challenging, but that don’t send them into a breakdown. The following three principles help to decrease overwhelming situations and improve a child’s task completion as well as happiness and long term willingness to continue to engage in that task.

1. Break it down to developmentally appropriate parts. If you’re asking your child to clean his room, it may be appropriate to ask a ten year old to pick up things on the floor, vacuum and make his bed. However it may take a far more detailed breakdown with a 4 to 6 year old. You may have to say pick up socks, then underwear, then shirts, then pants, then throw garbage away, etc.

2. Isolate each task. If simply having a list of the tasks is still too overwhelming for your child, you can create cards like we did and flip them over one at a time or put them in a hat and pick them out as each one is completed. With very young children that are easily overwhelmed it may also help for you to assist them with their task, one item at a time.

3. String the parts together with encouragement and understanding. If your child starts to get overwhelmed, ask if they need a short break, if they want to be timed, or if they could break it down further or move to a different part of the larger job. Remember times when you have felt overwhelmed and encourage them to focus their energy on what they are doing rather than what is coming.

Being overwhelmed can make a doable task seem unattainable. It can lead to frustration, sadness and anger. For children, this often translates into negative behavior and situations that can damage relationships because of irritability and unproductive reactions on the part of the parent. Helping kids find ways to manage their workload and stress can decrease overwhelm and is not only a skill that will save relational heartache and make it easier for us to keep our cool as parents, but will be a life skill that will serve our children throughout their lives.

Question: What do your kids get most overwhelmed with? How do you help them through it?

If you enjoyed this but would like to learn more about ways to solve conflicts more effectively, Read The Secret Solution for Kid Conflicts or just need another way to decrease the stress level in your home, Read 4 Differences a Song and Dance can Make.