What To Do When Kids Lie 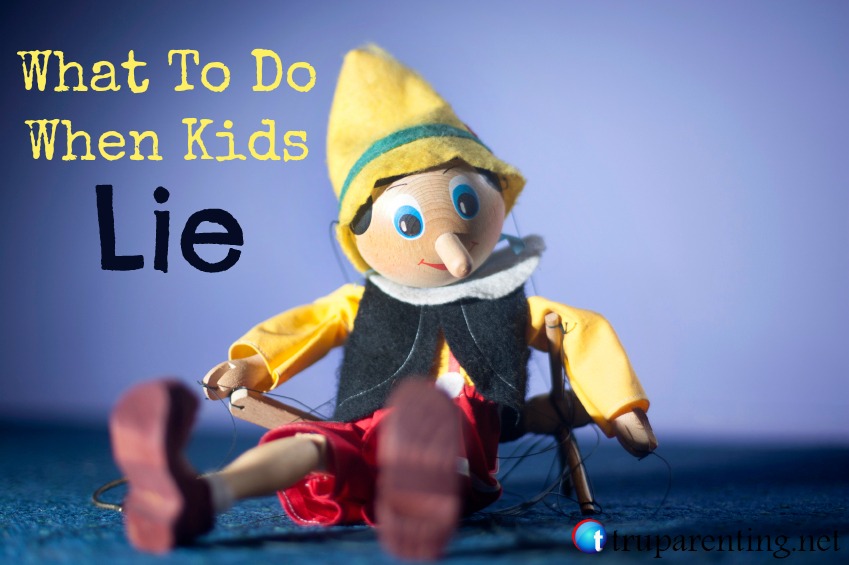 Pinocchio is probably the most iconic story related to the moral mantra, “Always tell the truth.” Wouldn’t it be great if all kids had a built in lie detector like Pinocchio. That big nose of his was pretty useful in teaching the practical lesson of “never tell a lie.” It was a simple evaluating tool for Gepetto, and gave Pinocchio instant feedback about his lies. Just like Pinocchio, lies often land kids in some tough predicaments, and yet that doesn’t seem to deter them from giving lying a good try.

“How do I get my kid to stop lying” or “What do I do when they lie” is one of the most common questions I get from parents. Kids can start lying as early as 3 years old and become especially developmentally good at it between ages 5-8. Often times the lies are insignificant fibs, but parents still feel disquieted by the lies and feel like they need to put a stop to it, because first, it is annoying to them and second, they fear the lies will grow into bigger, less manageable lies and nobody wants their kid to be “a liar.”

So, we know that kids have lots of reasons for lying, but how do we get it to stop? Before we start jumping to conclusions and dreaming up new torture devices to stop the lying, let’s do a quick evaluation of the TRU principles associated with helping our kids with lying.

TEACH: What is it we want them to learn about lying, and what is the most effectively way to teach what we intend for them to learn?

Relationship: How can we respond in a way that maintains and builds the relationship even as we set limits and boundaries? What can we do to better understand and empathize with our child’s situation?

Upgrade Yourself: Why does lying upset me so much? What do I need to do to manage my own emotions and behaviors associated with lying? Am I honest in my dealings with my family and others?

When we ask ourselves the questions related to the TRU principles above, we’re able to come up with solutions that build cycles of relationship, understanding, growth and honesty that will better prepare our children for personal responsibility instead of simply getting them to confess that they took the candy from the cupboard without asking.

Given the different motivations and severity of various lies, how we intercede can sometimes look slightly different although the basic principles of how we teach, build the relationship and upgrade ourselves stay the same regardless of the lie.

What should we do?

Two main overarching concepts to remember in dealing with lies…

1. Teach during the good times and proactively model what it means to be honest. Tell them stories of honesty and dishonesty and their consequences. Talk about how honesty can be hard but shows respect for others. We are seeking to build ongoing cycles of honesty and trust.

2. Focus more on the problem and the motivation for the lie, rather than on the lie itself and getting them to confess.

How to deal with specific kinds of lies

The Big fish stories are really not an issue of lying but rather of imagination. Some kids can let their imaginations run wild, which is not necessarily a bad thing, but can seem out of place to parents at times. These make-believe truths are usually pretty easy to spot. I once had a client who came to my office each week and would tell me some of the most outrageous stories about his week. Some of them were partially true but he was always trying to upgrade the true story. There were times when I wasn’t sure if he understood the difference between reality and the story and so I would ask, “Is that story make-believe or true?” He would tell me and most of the time he was accurate with his report of whether it was imaginary or a true story. This kind of “story telling” is normal and doesn’t require much in the way of intervention. As a parent we can listen and smile at their stories and simply compliment their amazing imagination. Recognize it as a story but do not challenge it. They know it is a story as well as you do. They are just better at making imagination “real” to them.

If you know they are lying:

My oldest son has just recently grown out of his fascination with writing on the walls in our home. He would write and draw using crayons, pens or markers. He even decided to etch pictographs on the walls using nails or pushpins he found around the house on several occasions. When we approached him about it we would say, “Cuylar, please clean the writing off the wall” to which he would often reply, “It wasn’t me!” The problem with this was that he was the only one in the house that could write letters and his whole name was written on the wall. There was no debate about who did it. We simply said, “Okay, I’m not concerned with who did it. I’m asking you to help me clean your name off the wall. Thanks.” If you already know the answer, don’t ask questions to “test” if they’ll tell the truth. When the self preservation or responsibility dodging lies come out, don’t worry so much about getting a confession as just following through with limits, boundaries and natural consequences of their actions.

It can also be helpful to talk to your child in an attempt to understand the “why” behind their lie at times that you are both calm and happy. The objective of this is not to unearth the lies or make them feel bad for lying, but to honestly understand what their motivation for lying is. It’s not an interrogation, but rather an exploratory discussion.

If you’re not sure if they are telling the truth but the lie is verifiable:

A frequent concern I hear in my counseling office from parents is that their child lies to them about their homework. They say, “I ask him every day if his homework is done and he either tells me he doesn’t have any or that it’s done. I find out later that he hasn’t been bringing it home or he gets bored and doesn’t finish it. Then I just get even more angry that he lied to me.” My response to these parents is, “trust but verify.” Let your child know ahead of time that they are free to play as soon as homework is done and you have seen the finished product. Put a system in place with the teacher if necessary to verify when your child has homework and what it is. The other option is to let them experience the natural consequences, or school imposed consequences of not completing homework and eliminate the desire to lie about homework. This can be hard to swallow for a lot of parents, but can sometimes be the best option.

If you’re not sure if they’re telling the truth but the lie is not verifiable:

My three oldest children are boys. They love to rough house, play outside and play Legos. They spend a lot of time playing together without direct, eyes on supervision. During these times when they are off playing on their own, we’ll hear a scream or cry and then we’ll see one or more of them come walking or running for consolation to either my wife or me. (More often my wife). They’ll proceed to tell a story of how their mean brother did this or that. Sometimes the reports are legitimate, while other times the way things happened are completely perceived and their brother did not intend to hurt them, they just don’t like how things worked out. This kind of a report from them is not as much a lie as it is a description of their “reality as they saw it.” Our first inclination is to bark at the other kids, “What happened? What did you do?” or to tell the child that came to you, “That’s not what happened!” This kind of a situation with kids becomes a “he said, she said” situation and our job is not to be the investigator. It doesn’t even require that we find out the truth about what actually happened. It just requires that we deal with our child’s emotions at that time and teach and encourage him to solve HIS problems as best as he can.

Lying can really strike a nerve with parents. It makes us feel out of control and disrespected, but our kids intentions are rarely as devious as we project on them. If we focus on the problems themselves instead of getting caught up in the emotion of the lying, we are better able to move through the normal developmental stages of lying and teach positive values and skills of honesty without destroying the relationship in the process. It also allows us to continue to build ourselves as people and parents and evaluate our own honesty and motives. If your child lies, remember, they are not a “liar.” If your child lies sometimes, they are normal, they are human and they are a kid. Let’s go ahead and step out of the lie game and just proactively teach and foster connection that reassures them that they have no need to lie or fear.

Question: What are some of your kids’ biggest fibs?