Modern Day Cosettes: Knowing the Signs of Abuse So We Can Help 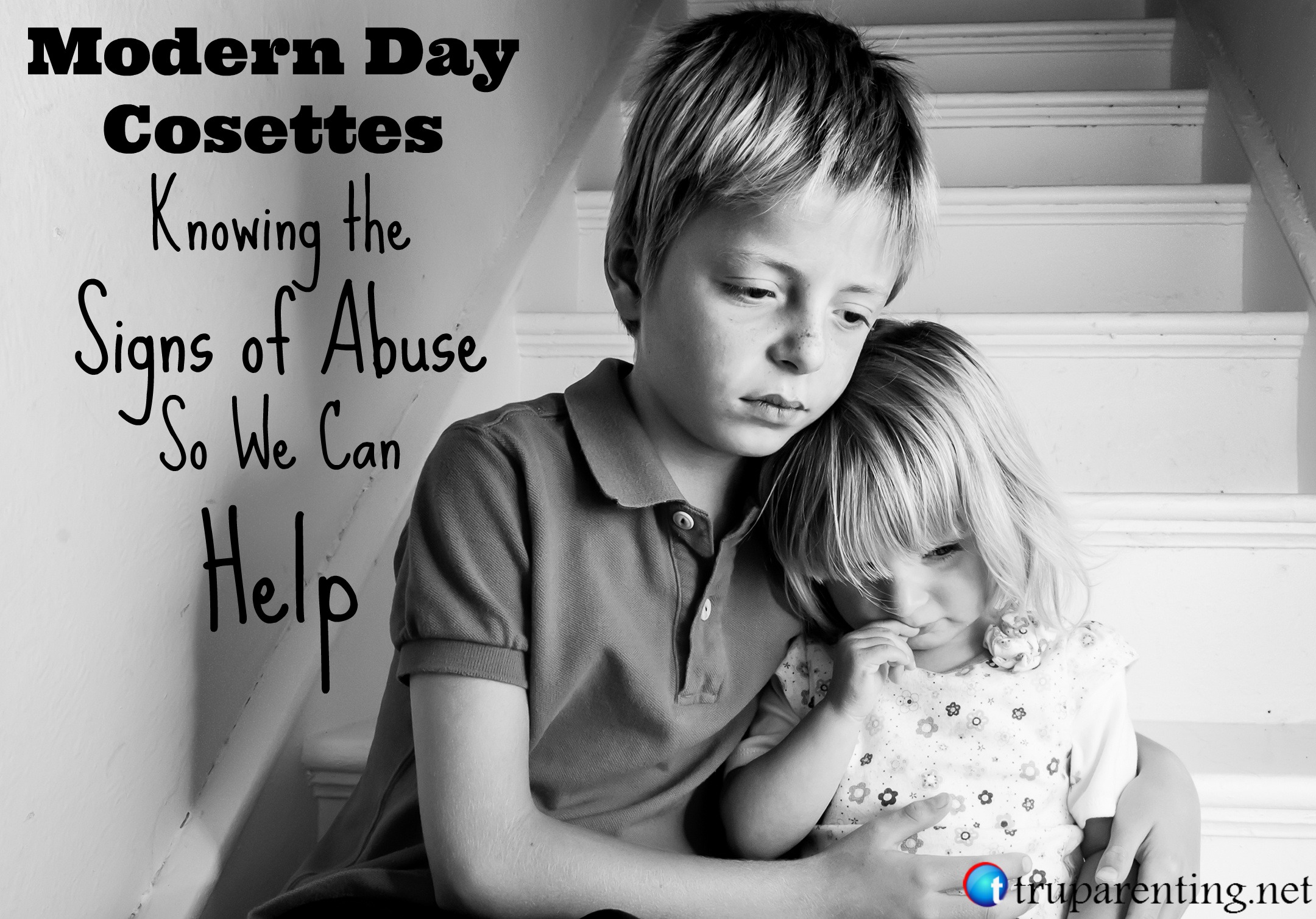 Imagine for a moment a 5 year old boy. He’s small and a little hyper. He has the energy of a bouncing chihuahua puppy, but significantly cuter. He loves to set up dominoes just to watch them fall and can’t sleep without his stuffed giraffe, Jimmy. Imagine a boy with a bright smile and all the potential in the world. Maybe he is meant to grow up to invent something that will change the world. Maybe he could grow up to save lives, write books, or raise a beautiful little 5 year old of his own.

Now imagine that same little boy, huddling in a corner, afraid. Imagine him grasping Jimmy the giraffe, not so he can drift off to sleep, but simply to hold on to some semblance of comfort from something soft and warm. Imagine his sense of self crushed and his hope of what could be destroyed by harsh words, painful violence or stark loneliness. Now, instead of playing with the other kids, he sits alone. He acts out aggressively or withers in fear each time you reach out to him. As he grows up, he picks up labels everywhere he goes. His trust in the world and other people is almost completely snuffed out. He wishes someone would see. He wishes someone would help.

It’s hard to think about

It’s hard to think about the horrible picture illustrated above. Since entering the field of mental and behavioral health, I have ached for children of abuse with stories like the one above. Above any other issue I have encountered, hearing the stories and witnessing the terrifying aftermath of child abuse has been the most emotionally taxing thing I have experienced.

Throughout my career, I have often been reminded of the classic piece of literature (and Broadway Musical) “Les Misérables,” and the story of a little girl, named Cosette, who is placed in the care of a tavern keeper and his wife, after her mother is left destitute. Cosette’s mother leaves her to find work in order to help pay for her care and keeping.Cosette is dressed in rags and treated as a slave. The way she is treated makes her feel like she is a terrible burden, and that her mother is a whore that never cared for her. Cosette is hit, kicked and treated with distain. She rarely receives a kind word from anyone. During one of her moments of greatest sadness she laments in song a place she goes in her mind that is safe in her own Castle on a Cloud.

(Castle on a Cloud, Les Miserables)

In the story of Cosette, there is a silver lining. Jean Valjean comes to her rescue and takes her out of that awful place. In a sense, he takes her, finally, to her castle on a cloud. He gives her back her hope and fills her life with love.

When I see children who are abused and mistreated, I often think of Cosette, and wonder how long the cycle has gone on. Has it moved from one generation to the next? I wonder if the abusers even know that what they are doing is abuse. I wonder how many have seen the child day in and day out without recognizing what was happening. Who in their life might have helped but just didn’t know what to do?

I want to share with you some of the different kinds of abuse and the signs of abuse so that we can be ready and able to help if the opportunity arises. Keep in mind that some of the signs listed below are not guarantees of abuse, but they are red flags. When these signs are extreme or multiple signs show their ugly heads simultaneously, they become a greater concern.

Childhelp.org, one organization at the front of the fight against child abuse, identifies four specific types of child abuse. They list and define the different types of abuse, and their signs, as follows:

The word “abuse” means “improper use.” There are obviously differing degrees of abuse. There are few parents that can honestly say they have never yelled at their children; and yet, it is important to understand that if there are patterns of this kind of behavior, yelling is abusive.

The proper “use” of children

The proper use of a child is to love them, to teach them and to provide an environment of safety and strength from which to grow so they can do it all again with their own children. If you or someone you know needs help calming themselves so they can parent without abuse, help them. Say something.

“Les Misérables,” tells a beautiful story of redemption, the power of the human heart, and the will to overcome tragedy and mistreatment. It shows that love truly can conquer all things. If there is someone you know that is experiencing abuse, reach out! Get help for the children who are suffering, and let them know that you will bind up their hearts and give them confidence in the world again as Jean Valjean did for Cosette.

“Every kid is just one caring adult away from being a success story” (Josh Shipp). Let’s be that caring adult. The stories of the children that suffer from abuse do not have to end with tragedy and heart break. We can help move them toward the happy endings they long for.