Prevent Meltdowns In Your Children: Learn Their Triggers and Signs 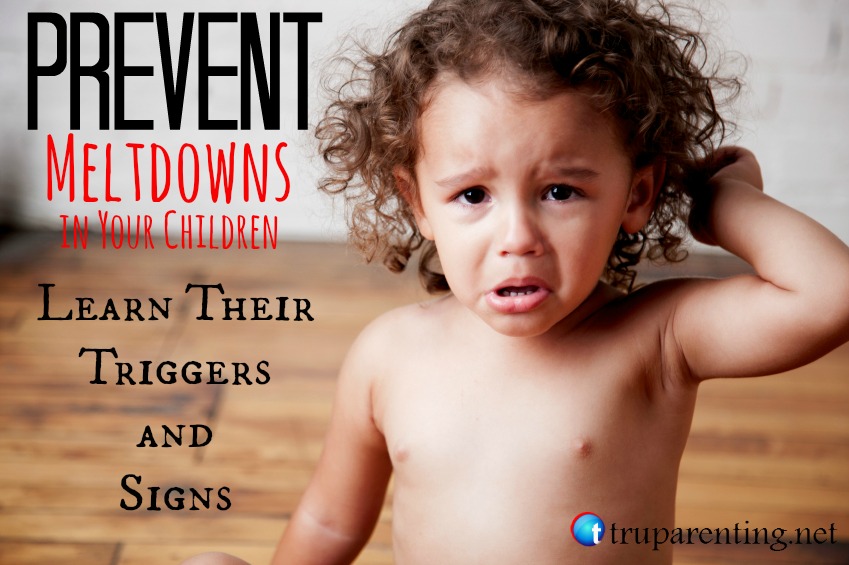 Do you ever wish you could prevent the emotional explosions before they even begin? I’m yet to find a parent that wants to yell at their child or resort to other forms of punishment. It’s just that big emotions are contagious and even grown adults struggle at times to manage our emotions when we have been triggered by the shrieking cries, flailing arms and legs and impulsive words of our children. So why not make it a little easier on ourselves and find ways to teach our children to regulate their emotions and solve problems without having to cope with a full fledged meltdown.

Learning to prevent emotional tantrums, but not robbing our children of the valuable opportunities of solving problems and dealing with their own emotions, can be challenging and takes a lot of practice. But, it can be done when we know what to do and how to do it. We can significantly decrease the number of tantrums by simply knowing and dealing with our children’s triggers and signs prior to a meltdown.

Watching for triggers and signs

Watching our kids for triggers that set them off and identifying specific signs that tip us off that their fury is about to be unleashed with the wrath of Pandora, takes some deliberate observation, but can help us to learn ways we can prevent all the drama.

If we are able to see the triggers that lead to these emotions and tantrum reactions, we can proactively teach our children ways to deal with those situations or manipulate unnecessary situations in ways that bring more favorable outcomes and emotions. When we know their signs of distress, we can jump in before they become unmanageable and help them learn to manage their emotions.

The following are a few common triggers and signs of imminent intense emotions and reactions followed by simple ways to head them off.

Triggers that often lead to meltdowns:

1. Stolen Goods: When siblings or peers take something from them.

Strategy: Prepare them for it. Teach a fun family night lesson about how to solve problems with others or what to do when someone takes something from you.

2. No: When they are told they can’t have or do something they want.

Strategy: Be selective about what you say No to or rephrase it as a yes. Sometimes parents get too nitpicky and find ourselves barking out, “No! No!” for every little thing. Save your hard “No’s” for safety issues and other serious infractions. When kids ask to go to Jimmy’s house to play, or to use the computer before they have completed chores, or the answer is no for some other reason, you can also change your No to a yes by saying something like, “You are free to ________, as soon as _____________.” Or “Sounds like you really want to _________. That sounds like a great plan tomorrow” or you can simply suggest an alternative.

3. The switcheroo: Transitions or quick changes from one activity to the next.

Strategy: Prepare them for the change when possible. Let them know what is coming next ahead of time. “We’re leaving in 5 minutes, so I’ll set the timer for 2 minutes so you can finish what you’re playing with and then it’s time to get shoes on to go in the car.” This kind of “heads up” is often helpful even with simple requests. “Okay, Mom is going to play cars with you for five more minutes and then we’ll clean them up and go cook dinner.” This one sentence can often mean the difference between cheerful, happy kids and total red alert.

[Tweet “This one sentence can often mean the difference between cheerful, happy kids and total red alert.”]

1. The eye of the tiger: Have you seen this look before. It resembles the stare, stalking and pouncing motions of a dangerous jungle cat. I just witnessed this with my youngest son. We were on our way upstairs to put the kids to bed. My wife and I started up the stairs with the boys trailing behind us. We heard a little squabble going on at the bottom of the stair between my second and third sons but didn’t think much of it. When they got up the stairs to their room, I saw it. My 4 year old had locked his eyes on his older brother and started toward him. I could see his muscles tense, his emotions rise to the surface and the determination in his face but I didn’t react fast enough. I knew something was coming but I was a moment too late. My 4 year old sunk his teeth into his brother’s side.

Strategy. Stop and think /Magic Word: I could tell before the bite happened that he was hurt and angry. I could even tell that he was going to act on those emotions, but I missed the short window of time to empathize, console and help him to manage those emotions instead of having to respond to the inappropriate behavioral expression of biting. In contrast, shortly after this situation I sat with my 4 year old and talked to him about how he felt when he wanted to hit or bite and what I could do to help him when he feels that way. I let him know I would remind him to stop and breathe like in the book, “I was Mad” and he would stop and either sit by himself if he needed alone time or come get a hug to help him calm down. Later, we were sitting down to do read books before bed when he became upset about not getting to sit next to Mom. I saw the eye of the tiger but before he could pounce I said, “Berkeley, stop and breathe.” He did it! Those words were enough of a cue to help him be aware and change his course of action.

2. Tripwire Bottom Lip: MY six year old son is the best at this. The bottom lip sticks out. When we see his bottom lip almost dragging on the ground we know it is a sure sign of hurt feelings or sadness. When the lip starts to drag, we know it’s a tough one and the feelings are about to overwhelm him.

Strategy. Empathetic words and a calming touch: Sometimes parents can’t see what the big deal is. Our kids start to cry uncontrollably because their brother got the cup they wanted and we think, “Seriously? This is not the end of the world.” My six year old is a pretty sensitive kid, which can mean that he can be easily set off emotionally, but it also means that he is our most responsive child when others are hurting or needing some encouragement. Sometimes he comes to us with the lip dragging on the ground and we ask, “What happened? What’s going on? What are you so upset about?” And he simply refuses to tell us what is wrong but I have found that what is wrong is far less important than how I respond to this sign of my son’s personal hurt and sadness. If I demand that he tell me what’s wrong in some attempt to “fix” the problem so he won’t be so emotional anymore, he either withdraws or becomes more upset. But, if I stop and reach out, if I just hold him in my arms and say, “I’m sorry you feel sad man,” he is generally able to resolve his own emotions relatively quickly. He then just goes along his way without any further problem.

3. Airlock Breathing: Have you seen this before? It’s the short, shallow breathing that comes when they start to really heat up. Truth is most adults do this too when they get frustrated, anxious, fearful or angry. If you watch kids that end up hitting or being physically aggressive, this is one of the signs you’ll see before they finally bring the hammer down.

Strategy. Relaxation and meditation breathing: Teach your child ahead of time how to take deep “belly breathes” and to relax their body. The body’s natural response to fear or anger inducing stress is to increase heart and respiratory rate. It’s all part of that fight or flight thing everyone always talks about. Consciously interrupting that with slow, regulated breathes can disrupt that emotional feedback loop and help us feel, think and make better choices. Some good ways to help kids learn this is to do some child yoga with them, practice deep breathes in and out using balloons or bubbles, or have them lay down and put a book on their belly and tell them to watch the book rise and fall each time they breathe in and out. Then let them know that you’ll help them remember to breathe when you see them start to “airlock breath.” You can use a single cue word again like, “breathe” or even “bubbles” to help them remember and apply the skill.

The triggers and sign above are just a few of the common triggers and signs I’ve seen in my own and other kids. Each child is unique and has their own set of triggers and signs that are like their “poker tell.” If we can learn to see these things, we can more effectively deal with situations and emotions in positive ways that build happy, healthy cycles of behavior and relationship in our homes.

Question: What are some of your kids triggers and signs? How can you plan and help them cut them off at the pass?