The Secret to Creating the Parental Confidence and Happiness You Want 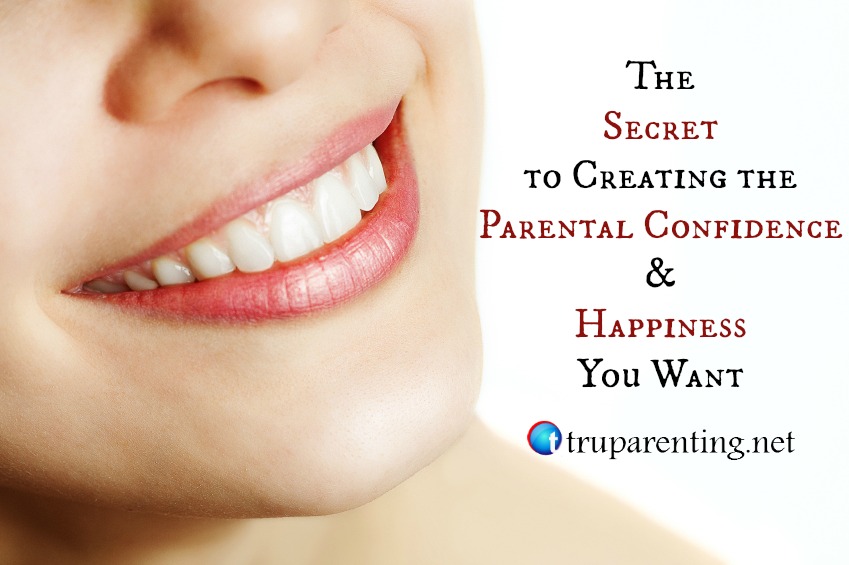 I heard a story years ago about a motivational speaker that was speaking to a large group of people. He was teaching about the power of positivity. He asked someone from the audience to come up on stage and gave them the directions to “walk across the stage acting as if they were miserable, angry and like nothing was going right in their lives.” The volunteer sauntered across the stage with head hung down, shoulders stooped, lips drawn into a heavy frown, stomped slightly with his feet and even gave a little unsatisfied grunt as he reached the other end of the stage. The speaker then invited this individual to turn around and “come back across the stage acting as if he was confident, happy, calm and as if he was excited and looking forward to what was coming next.” As the man came back across the stage, he transformed, both to himself and to everyone watching. He straightened his back, squared his shoulders, put a smile on his face and walked with a skip and with purpose in his step.

The speaker asked the audience, “Which of these people would you rather be around? Which would you like to hire? Which would you be drawn to at a party? Which would you rather trust or take advice from?” The reply each time was the same; “The happy, confident one!” He also asked the man that participated on stage, “How did you feel as you acted both of these parts? The man responded that he felt better the second time across the stage. He felt like he took on the attributes of the part he was playing. The speaker went on to make the point that most often we feel and believe about ourselves and our situation how we act. When we act as if we are happy and confident, kind and caring, we start to take on those attributes internally.

What came first; the chicken or the egg?

Most of the time we think that we should feel a certain way before we can act accordingly, but the truth is that there is a mind/body feedback loop that doesn’t care where we start the cycle. Whether we feel happy and then smile or smile and then feel happy is less important than actually smiling and being happy. I’ve shared this concept with parents in counseling sessions on many occasions and gotten the response, “but isn’t that faking it? I feel like I’m faking it if I smile or talk calmly when I don’t feel happy or calm.”

I’ve heard people teach this principle of “acting as if” before and said, “You bet it’s faking it. What’s wrong with that? Fake it ‘til you make it!” I disagree with this. I do not think the skill of “acting as if” is faking it at all. I believe it is the ability of a person to take an active, creative role in their life and circumstance rather than being a passive observer and victim. Acting in proactive positive ways even when you don’t feel like it is not faking, but creating! This doesn’t mean that we deny our problems or swallow our emotions. It means that we face them with confidence, grace, wisdom and courage. We revel in the opportunity to find contentment, peace and happiness even in the midst of sadness, anger and other emotional storms. When we get good at this, we start to act in ways that actually help to solve problems rather than make them bigger, build relationships rather than tear them down and edify our own soul and build personal character rather than turning ourselves into our own worst enemy.

[Tweet “Acting in proactive positive ways even when you don’t feel like it is not faking, but creating!”]

Be a creator in your parenting relationship and life

I often ask parents when they first start counseling or when they start a TRU Parenting class, “What kind of a parent would you like to be? What do you want your relationship with your child to be like? What do you want for your kids?” The responses are varied but generally fall into some basic categories. “I want to be calmer and happier. I want to connect more. I want my kids to learn what is right and be productive, happy people.” A lot of times these declarations of what they would like life to be like are followed by statements like, “But I just get so stressed and don’t feel like being calm and happy. I don’t feel like connecting.”

I’ve found that the feelings come after the action rather than before. When I set out to build a house, I’m not particularly looking forward to pouring concrete, framing walls and putting up sheet rock but I certainly enjoy the finished product. When it is done, I feel the cozy, secure feeling of sleeping under my own roof. When I clean the kitchen, I don’t longingly anticipate scrubbing dishes or wiping the messy tables but I love the feeling I get when it is done. When my child is throwing a tantrum because he did not get the pack of gum he wanted, I do not feel like talking softly and gently guiding him back to reality, but I am glad that I acted with kindness when my child calms down our relationship and his regulation skills are enhanced rather than destroyed.

The following 11 things are just a few things we can DO that help us to ACT AS IF even if we don’t feel like it. These steps can help us to create something better for ourselves, our kids and our family as a whole.

9. Be grateful and show gratitude

10. Relax: Let go of muscle tension you are holding on to

When you create a piece of art, music or technology using patterns and tools of that creative medium no one asks, “aren’t you just faking it?” When we attempt to create happiness and positive relationships with the patterns and tools that lead to this masterpiece, questions arise whether it is authentic. Sometimes the feeling comes first and makes the actions much easier, but that does not make the actions any less authentic or valuable. When we act as if we are that parent we want to be, it brings that creation to life. We begin to feel it and it becomes easier with each revolution of the cycle.

Question: What do you think about this concept?