How to Stop Tantrums Now and Prevent Them Later 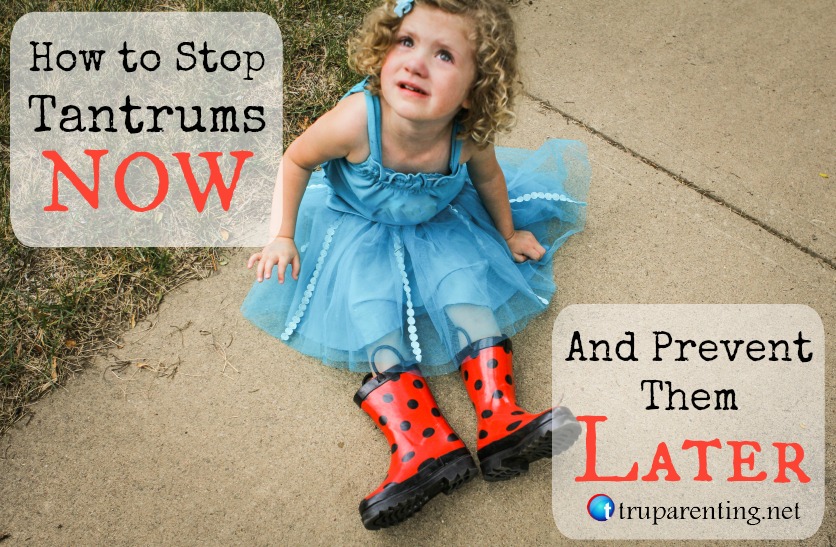 I recently watched a mother and her little girl in the grocery store. As they moved past the freezer aisle of the store, the little girl let out a shriek and began to wail in the cart. She yelled at her mother, “I want a popsicle NOW!” This mother calmly told her “no.”

Her daughter immediately started to whine and complain and I heard the mother quietly say, “No Emily, we just have half the aisles left; It’s okay. It won’t be long.”

I was impressed by this mother’s command of herself and the situation. As I continued my own shopping, I noticed that our paths continued to cross. Each time they did, I became a little more impressed. The next time I saw them was in the candy aisle where, of course, the little girl began to shout for candy. She started to cry inconsolably when she was told that they would not be getting a candy today. The mother said, “There, there, Emily; there’s just two more aisles to go and then we’ll be at the check out.”

At check out, I found myself right behind them in line and it happened once again. The little girl reached and cried out for the gum on the checkout line shelf. When she was calmly assured that they would not be getting gum, she began to meltdown into a full blown tantrum to which the mother patiently said, “Emily, we’ll be through the checkout stand in a couple minutes, and then you can go home and have a nice nap.”

I was so impressed. I felt her response was worthy of a little praise, so I approached the woman and said, “Excuse me, I couldn’t help noticing how patient you were with little Emily…” The woman cut in mid sentence and said, “My little girl’s name is Katie… I’m Emily.” (Story adapted from Jokes – News.com)

We find it humorous that Emily was talking to herself, but her ability to calm herself and be kind but firm with her boundaries, is exactly the kind of thing we are looking to accomplish as parents.

Tantrums can be a frustrating and strong emotion inducing experience for everyone within ear shot. It can help to have some perspective so we can follow Emily’s example to stay calm; kind but firm. It’s important to have an underlying understanding of what is truly causing our children’s tantrums. Understanding is the key to compassion, wisdom and positive change.

[Tweet “Understanding is the key to compassion, wisdom and positive change.”]

Get Some Perspective. Why do kids throw tantrums?

If you really stop to think about what drives kids’ tantrums, you can gain a lot of insight by considering what motivates adult’s tantrums. To make it even a little more poignant, ask yourself what induces your own tantrums? We rarely refer to our outbursts of frustration or anger as tantrums, but the only major difference is that most of us have learned some techniques to manage our actions in more socially appropriate ways, even when those waves of strong negative emotions arise.

Consider the following reasons for tantrums…

The easiest way to stop a tantrum, but the most ineffective in teaching our children to regulate their emotions, calm themselves, delay gratification and communicate in positive healthy ways, is to simply give in. Sometimes we feel like a technique “worked” because the immediate behavior stopped. That is why we should not measure the success of our parenting by our children’s behavior, but rather our own. Giving in to the demands of a tantrum does not solve or change the ongoing cycle. Rather it contributes to the negative long term cycle.

Tantrums can trigger a lot of things in parents and can often bring out the worst in us. So we need a game plan; some practical ways to cope and intervene with tantrums that do shorten the tantrum and build healthy cycles of growth for our child and ourselves in the long run. The following 6 techniques are solutions that work now to prevent or lessen the impact of the tantrum now and create positive cycles of emotional regulation and communication later.

Solutions that work NOW and LATER

1. Share More Control. Let go of things that don’t matter, but are simply issues of power. Try to say yes more and no less. Turn no into yes. Instead of saying, “No, you can’t go play outside. You haven’t cleaned up your toys inside yet like I told you to,” say something like, “Yes, you may go play outside as soon as your toys are cleaned up inside. Would you like help or do you want to clean them up by yourself?” Give your child choices whenever you can, but keep the choices simple. You could ask things like, “Would you like to wear the red PJ’s or the blue PJ’s tonight?” or “Would you like to choose your PJ’s or would you like Mom/Dad to pick them out?” The bottom line is find ways to share control to a level they can handle.

2. Teach during the good times. It can be helpful to use play, family nights, reading together or other positive moments together to teach self regulation and communication skills and techniques. Identify triggers and signs and practice alternatives together to yelling and other “meldown” behaviors. Teaching these skills during the good times can help to prevent meltdowns altogether.

3. Establish a shared plan. Ask questions like, “How close do you want me to be? What helps you calm down? What are some things you and I can do to help you calm yourself and solve problems? Brainstorm and collaborate together and establish a plan that you can both agree upon. Write it down and post it somewhere in the house where you can both see it.

4. Empathize but don’t cave. Dr. Harvey Karp who wrote “The Happiest Toddler on the Block” offers a parenting rule he calls the “Fast Food Rule.” The rule is to repeat their order before giving any of your own orders or suggestions. An example might look something like this… “You look mad, mad, mad! You want the toy that your brother has sooo bad!” One of the most important parts of calming and stopping a tantrum in its tracks is to seek to understand and validate their feelings first. Realize that this doesn’t mean you have to give in to what they are tantrumming about, just understand why it makes them so upset and be there.

5. Allow natural consequences to occur. It isn’t necessary to punish our child for every inappropriate expression of their emotions. But in the course of their tantrum natural consequences may occur. They may miss out on something and that is okay. It’s also okay if they are upset about that too. For instance, my youngest son has had several occasions, right around bedtime, when he has been angry to the point of a screaming tantrum. We have attempted to share the control and refer to the skills he has learned with consoling empathy, but ultimately, he would not have it. He simply needed time to allow himself to process the situation and calm himself, so that is what we allowed him to do. However, the whole time he was tantrumming, he was missing out on bedtime stories. When he finally calmed down, he had missed the stories and it was time to get in bed. I would be lying if I said that there weren’t more tears when he discovered that he had missed story time. But these tears were less angry and sadder, to which we could empathize and console him. Allowing for natural consequences like this to simply occur can be difficult at times, but helps our children to understand the natural order of things and the effect his emotions and behavior have on his and other’s lives.

6. Connect and Reconnect. Both before and after a tantrum, take time to connect with your child. Reconnect as soon as they will allow you to move toward them or they move toward you. There’s never any need to hesitate to show love and affection.

Tantrums can really take a toll on us and our children. However, we can help them cope with their strong emotions and coach them to a better way over time. Regardless of our specific actions in dealing with tantrums, it is important to always remind ourselves of the TRU principles of parenting and ask ourselves questions that help us evaluate our application of TRU principles. We can ask…

· Do my interactions with my child teach him the skills and values he really needs to manage his emotions and deal with his tantrums?

· Am I managing my own emotions and challenging myself to upgrade my own responses to hard situations and tantrums?

When we can say yes to these questions about our application of TRU parenting principles, we can be confident that we are promoting healthy cycles of regulation and communication. Tantrums won’t last forever. We can give our kids the skills they need to become masters of themselves and to continue to build love through the opportunities that tantrums present.

Question: Tell us a story of one of your most difficult tantrum moments with your child. How did you manage and deal with it?