When is it Okay for Kids to Fight? Who’s the Bully? 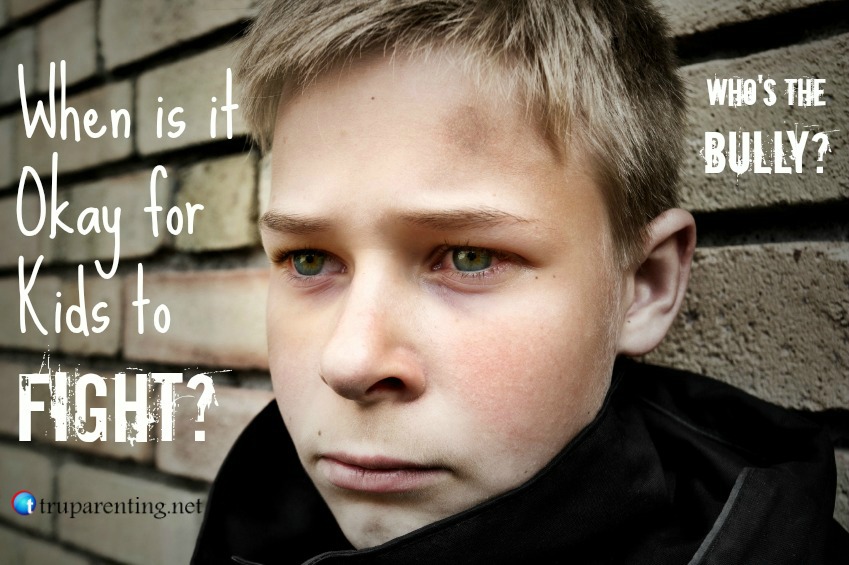 For many or most reading this, your immediate response to the title of this article may have been outrage and a resounding, “Never!” However, please reflect on the following example and share your sincere opinion with the rest of the TRU Parents out there. I think it is a question worth considering.

What would you do?

I recently had a client come into my office with a concern about her son fighting at school. As it turns out, it was not an issue of her son being a bully or picking fights on an ongoing basis, but rather about a single incident where her son was being bullied, both verbally and physically and he finally fought back.

The child’s Mom was furious when she got the call from the school that her son was “fighting” at school. The first thing she said to her son when he arrived home from school was, “You’re grounded. I heard what happened at school today and you are grounded until your detention is up.” She later heard the whole story from several different sources and then became angry at the school.

Her son had received several days of detention for “fighting” at school. The school had a no tolerance policy for any kind of fighting or violence and he got caught in the cross hairs. I’ve even heard of instances were kids were suspended or expelled for fighting, even when they were simply defending themselves. In this kind of scenario, what would you think and do?

Many of you may have seen the Youtube video depicting the school yard fight between two boys from Australia. You’ll probably recognize the clip in the video below. Many people jumped in Casey’s corner to defend his actions and to even prop him up as a hero. Whether that is right or not, I will let you decide, but in deciding how to teach our kids when it is okay to fight and how to deal with bullies, it may help to consider the plight of the bully and the bullied. The following video seeks to give voice to other perspectives on the story…

So many have cheered this little boy on, while others, have voiced serious concern about the severe danger of this boy’s method of defending himself. My sincere question is, “What do we tell our kids? How do we teach them to stand up and protect themselves without encouraging aggression or violence? What is the last straw? How do we encourage our kids to be empathetic, compassionate and understanding of the pain of the bully without getting walked on emotionally or physically? When does someone cross the line between, walking away or dealing with it in a ‘problem solving’ sort of way and defending themselves?”

I’ve seen several old shows including, “Leave it to Beaver,” “The Brady Bunch” and others like them, were a kid is bullied and the TV Dad gave the advice, “If you want him to stop, you’ve got to stand up to him and show him that you are not going to play the victim in his game. Pop him one in the nose and he’ll quit intimidating you!”

In contrast, I’ve heard teachers and parents of our current school age generation tell kids that the go to response is to “yell for help or tell an adult.” These are drastically different pieces of advice from two very different eras.

To be honest I’m not sure which is better, or if the answer is a combination of the two, or something totally different.

What do we want them to be?

On the one hand, we want our kids to be able to set assertive, appropriate personal boundaries and stay safe. On the other hand, we don’t want them to think aggression is an effective way to solve their problems or for them to get into trouble at school or legally. We don’t want our child to be a victim, but we also don’t want them to be a bully. It’s essential that we establish a relationship with our child that makes them feel comfortable talking to us about issues that are difficult or embarrassing for them. They need to know that we are there to listen and help them solve their problem in the most effective way possible.

As I’ve contemplated this topic, I’ve come up with a few ideas or suggestions for dealing with teaching kids when it is okay to fight, but I would like to preface them with the statement that they are only suggestions and I am earnestly and honestly seeking feedback from you about what you think, what we should teach our kids and how to teach it to them.

What to teach? (TRU Principles)

1. You are important and you can proactively set boundaries with others. People may say mean things and try to belittle you but you do not have to believe them. You will always have value, no matter what others say about or to you.

2. Other people are important and you should not overstep other’s boundaries. Other people deserve the same respect that you deserve. We should never try to belittle or hurt another. There is no strength in making others appear weak.

3. Seek reconciliation and kindness first. If you have wronged another person, be a big person by apologizing and finding a way to make it right to the best of your ability. Forgive others and let things go that have offended you. Better yet, don’t get offended. Seek out solutions to problems with others before they become a physical altercation.

4. If others violate your physical boundaries, then and only then should you defend yourself. Remember that the point of defending yourself is to protect yourself, rather than to harm the other person. Many of the martial arts teach that self control is our best weapon and when we control ourselves, the aggressor will often times, defeat themselves.

How to teach it. (How to apply it)

1. Build self worth in your child. Compliment them. Challenge them, give them encouragement and help them see that their strengths are independent of what anyone else says about them. Model appropriate boundary setting. Show them how to say NO without being cruel or rude. Allow them to say NO to others. We often are reluctant to allow our children to say NO. We worry that this will make non-compliant, defiant kids. However, the truth is that when kids NOs are honored, they learn that they have some power over themselves. That does not mean that we do not set boundaries and follow through with consequences, but it means that we allow them to choose their consequence by the decisions they make.

2. Teach them to build people up rather than tear them down. Model kindness to others even when we disagree or feel slighted by another. Show them that honoring other’s boundaries is just as important as others honoring yours.

3. Teach them proactive ways to solve problems with people and to encourage resolution and friendship. In previous articles I have addressed systematic ways to teach kids to solve problems or ways to use play to teach these same skills. Kids can learn how to calm a tense situation with humor or by staying calm themselves that will, in most instances, eliminate the need to ever fight.

4. Prepare them to be able to defend themselves in ways that are non-violent first. Allowing your child to learn a martial art or teaching them ways to evade, block or defend themselves against violence can be helpful if it is ever needed. Teach them ways to move and use body weight that allow the bully or aggressor to defeat themselves. It can be helpful for kids to learn a disciplined martial art or attend a self defense class for kids.

The “WHAT’s” and “HOW’s” above are my attempt at thinking through what to teach our kids about fighting and how to teach them proactive, appropriate, effective ways to deal with bully’s or violence if they do come across it. I ultimately want my children to be kind, caring and understanding people above all, but I also want them to be safe and to be able to stand up when they need to. How to achieve that balance is something I have not had to address directly with my children yet. I hope they do not have to deal with bullies, especially of the physical variety, but I hope that I will have some answers and will give them a solid, balanced foundation with which they can address the issue if it does ever arise.

Question: Have you ever had to deal with a similar situation? What did you tell your child to do? What do you think about when it is okay for kids to fight and how can we teach it to our kids?

If you liked this article, and know someone who would benefit from it, please LIKE and SHARE it on Facebook, other social media or just send them an email. You may also like the following articles. “How to Teach Kids that Hitting is Not the Answer” or any of the articles pictured below.